Thanks for joining us for the first-ever virtual Tri-College Film Festival on Thursday, May 7th! There are three ways to keep on watching:

Festival partner PhillyCAM will be hosting the entire shorts program on YouTube for the entire month of May. Watch now!

The festival’s shorts program will also screen live on PhillyCAM’s cable TV channel every Saturday in June 2020 at 1:30 p.m. Make sure you tune in to watch Tri-Co student films on television!

Finally, don’t forget to check out the three films from the Directors’ Sidebar, as well as the Multimedia Special Feature, below!

A Month Apart – Jake Rothman
A boy spends his time in isolation hoping to develop a relationship.

Swish – Shane Jung
Two college seniors brood over what has come to pass, where they will go, and what could have been.

Boicemail – Alexandra Iglesia (Audience Favorite Second Runner Up)
The film begins with voicemails from my grandmother, Lola Margie. Then it transitions to narration over pictures, and speaking about my upbringing. Finally, the experimental segment of the film starts, where various Filipino dishes are ruined by American products, all while the original voicemails from my grandma play and I read how my phone transcribed them.

Lucia – Ariana Hoshino, Natasha Markov-Riss
This 3 minute experimental film probes the imagination of four year-old Lucia, who is captivated by space. We follow Lucia on a very special trip, using animation and digital footage to reconstruct scenes from her mind.

Wild Boar, Running on the Highway – Rubing Zhang
As COVID-19 evolves into a pandemic, this experimental documentary explores various moments that people of Chinese ethnicity live through, and questions what the Chinese identity means.

Just Visiting – Annarose King (Audience Favorite Award)
Eva will roll the dice to meet the man of her dreams. Will she forever be stalled on free parking, or will she land on love? Find out in this nerdy concoction of board games, romance, and destiny.

Definition – Rubing Zhang
Maggie, a first generation immigrant and a working class woman, faces a dilemma in her relationship with her husband when pressures from her work and their disagreement on the way to educate their daughter accumulate.

“Monarchs in Riverbeds” – Fouad Dakwar, Ariana Hoshino (Audience Favorite Runner Up)
“Monarchs in Riverbeds” is the title track of Fouad Dakwar’s debut LP exploring the convergence of love and revolution. Directed by Ariana Hoshino, its music video visually depicts the song’s call to action through a revue of extreme wealth disparities that culminate in a “splashing” allegorical conclusion.

Date of Birth? – Grace Sue (Third Jury Award)
What happens when you’ve never known your real birthday? This is a story about searching for this meaning through retracing the footsteps of our ancestors.

meditation on telepathy – Madeline Shuron
how can i be lonely if i have myself // hands are the windows to the soul, right?

The Apologist – Ilana Epstein, Ariana Hoshino
Bic Whitman is a professional apologist at The Apology Agency – a company that personally delivers apologies right to your door. The bad news is, he’s not very good at his job. With the help of his eccentric boss Taz Grassman, Bic sets out to become a better apologist and happier person, but finds that his job isn’t the only thing standing in his way.

Mr Happy Attends a Tragic Affair – Ariana Hoshino
A man is invited to a wake but is nervous about attending because he is unable to physically express his grief. To make up for this insecurity he juices an onion and brings along a vial of the liquid to the wake. When confronted with the many overwhelming displays of sadness, the man retreats to a bathroom where he forces himself to cry so that he might fit in.

Price Per Session – Jake Rothman (Second Jury Award)
A college student working as a prostitute emotionally distances herself from her work.

The Directors’ Sidebar highlights submitted films that were not selected for this year’s program, but that the festival directors want to recognize as exceptional films.

Kinfolk Kickback – Ruby Bantariza
Two roommates planning a kickback and reflecting on their relationships with people over the past few years. This film raises the question, who’s around and why?

something to take the edge off – Jude Robinson
A one-sided relationship turns sour in this horror short.

They said what on Camera? – Saket Sekhsaria
A YouTuber has to decide between his identity and his fanbase.

A Creative Invasion – David Molina Cavazos
This video essay focuses on the impact that Minecraft had on me, how that game served as a platform to explore and expand my creativity through technology and visual art. Unlike traditional video essays this project has to be physically experienced, the audience is placed in a cube created by projector screens. Both the visuals and the audio is manipulated in 3D space, audience members will have to twist and turn to follow along – mimicking the disorientation I felt as I grew as both artist and individual. https://glitch.com/~dmc-creative-invasion 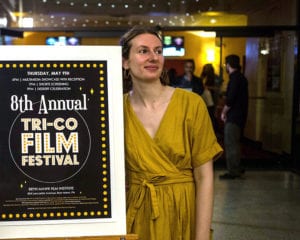 Sophia Abraham Raveson (Haverford ’18) is excited to be returning to the Tri-Co Film Festival as the Festival Director. Sophia studied English and Africana Studies at Haverford, and loves working to showcase diverse narratives. She served as the Program and Administrative Assistant at BlackStar Film Festival for the last three years and truly enjoys programming film festivals. In addition to her festival work, Sophia loves to dance, perform karaoke, and write music with her new band where she is playing the drums for the first time! 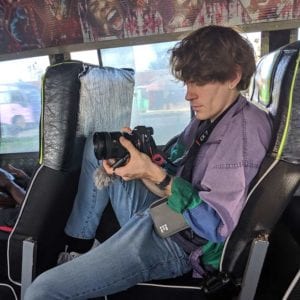 Eddie Ogborn, from Littleton, CO, graduated from Haverford College in 2019. They majored Comparative Literature (French and English) with a particular focus on film theory and production. Eddie was a Student Fellow for the 2018 DocuLab project Dizhsa Nabani, a documentary series about a Zapotec language and culture in Oaxaca, Mexico. The following summer, they worked as Project Coordinator for the 2019 DocuLab, which produced the documentary Bicentennial City, an exploration of the social tensions at play in Philly during the American Bicentennial celebration. They are currently editing a short documentary about water access issues in the Nairobi which was shot in November of 2019. Eddie is thrilled to be co-directing the Festival, and cannot wait to see what wonderful works the TriCo film community has in store for this year! 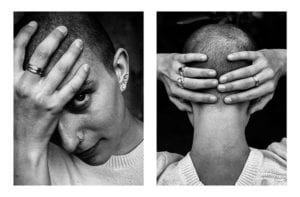 Georden West (pronouns: they, them) is a time-based media and installation artist whose work reflects the subculture, history, and daily lives of queer people. Their moving-image work focuses on queering the art house film.

Georden apprenticed within the fashion industry internationally, assisting on shoots for clients including British Vogue, Dior, V Magazine, and AnOther Magazine while at Nick Knight’s London-based SHOWstudio. Their Oscar-qualified work has screened at festivals including Outfest, the International Fashion Film Awards, and, most recently, won gold at the 2019 Student Academy Awards.

Georden holds a BA and a Certificate in Advanced Leadership Studies from an unnamed university where they were a Batten Scholar and the recipient of the Annie Terrill Bushnell Leadership and Nicole Kohn Film Awards. They went on to be an Emerson Fellow and received their MFA from Emerson College where they serve as an affiliate faculty member.

Tayarisha Poe is a storyteller from West Philadelphia who believes that all stories are inherently multi-sensory and multi-dimensional, and should be told that way. Presently, she is works as a writer and director for film and television. In 2017 she was selected for the Sundance Screenwriters and Directors Labs. She is a 2017 Pew Fellow. She was listed as one of Variety’s 10 Directors To Watch in 2019. Her first feature film, SELAH AND THE SPADES, premiered at the 2019 Sundance Film Festival, and will be released April 17th via Amazon Studios.