This image by Roma Hdlaky ’22 was taken the night of 20th Sept 2020 at Haverford College.

The blue [emission] in the center is produced by the H-alpha filter. OIII and SII filters were also used and stacked in this image, but were faint in comparison to H-alpha.”

Today’s student image from the Advanced Observational Astrophysics class is a purple view of the Pelican Nebula, by Kate Matthews ’22.

Kate explains: “The image above is of the Pelican Nebula (IC 5070), a nebula with magnitude 8.0 located 1,800 light years away from Earth in the constellation Cygnus. This color image consists of 30 individual overlaid images with an exposure time of 120 seconds each, giving the final image a total exposure time of 1 hour. These images were taken with the CCD on the 16” telescope at the Strawbridge Observatory on September 20, 2020.

The Pelican Nebula is an HII region, meaning it is an emission nebula made up of gas clouds ionized by very hot, nearby stars. To capture several different ionized gases in the nebula, we used 3 emission line filters when taking the images: Hα, OIII, and SII, which refer to ionized hydrogen, doubly ionized oxygen and ionized sulphur, respectively. Each filter was assigned a color when creating the final composite image, specifically magenta for Hα, green for OIII, and blue for SII. Due to the large amount of energy required to ionize hydrogen, Hα emission is a common indicator of new star formation.”

Ross explains: “Pictured above is an image of the Helix Nebula (​NGC 7293) created from a 16’’ telescope and CCD. We took eleven exposures at 120 seconds each for emission lines in each filter (​Hα, OIII, and SII)​ from ionized gas in the nebula. Emission spectroscopy allows us to read electromagnetic radiation from chemical elements in an astronomical object. In this case, we were able to compile the images and assign pigmentation to each emission filter to create a full color image. Classically, red, blue, and green colors are assigned to each layer, but I chose to create a different image, using magenta, yellow, and cyan. The first image shows ​Hα in magenta, oIII in cyan, and sII in yellow. The second image has Hα in yellow, oIII in cyan, and sII in magenta, for a slightly different composite image. Sometimes, the Helix Nebula is nicknamed “The Eye of Sauron” as a reference to the Lord of the Rings addressing the eye-like shape of the nebula!”

Imaging and text by James Garland ’22.

At the center of the Helix Nebula, a star late in its life sheds layers of its atmosphere. The star’s remaining heated core illuminates the surrounding gaseous shells, ionizing atoms and in turn producing light. In this three-color image, we capture this light which has been imprinted with the identities of the elements that emitted it: hydrogen-alpha (H𝛼), doubly ionized oxygen (OIII), and singly ionized sulfur (SII). These elemental snapshots, presented in red, green, and blue respectively, allow us to better view and understand the nebula’s structure.

Eleven 120 second exposures were taken in each filter with the Proline PL16803 CCD on the 16” telescope at Strawbridge Observatory. The exposures were aligned and stacked in AstroImageJ. The resulting three images were combined to make an RGB composite, which was adjusted for contrast and color balance. The original image captured a 30 x 30 arcminute field of view, roughly equivalent to the diameter of the Moon. Here, it has been cropped to a size of 27.6 x 27.6 arcminutes. The image was taken on the night of September 19, 2020.

This image of Messier 13 (The Hercules Cluster) was taken by Autumn Winch, BMC ’22 as an assignment for Astro341: Advanced Observational Astrophysics this semester.

Autumn explains “Above is an image of Messier 13 (M13), also known as the Hercules Cluster. M13 is a globular cluster and is home to around three hundred thousand stars, both young and old. It rests within the Hercules constellation and is quite bright within the Northern Hemisphere (through a telescope).

Images were taken on September 18-19, 2020 from hours 11pm to 1am at Strawbridge Observatory. Vega was used as its meade star. The composite picture consists of three filters. The B filter gives us blue, the i filter gives us red, and the r gives us green. In the end we have a light lavender rose color. Stars vary in color mostly due to temperature. Different temperatures emit different wavelengths of light. These varied wavelengths give a wide spectrum of colors, not all visible to the human eye. The filters control which wavelengths of light are admitted through.

Lucky for us, Messier 13 is up in the sky for most of the year. It has its highest visibility in the summer, but still looks beautiful in the early autumn.”

This pair of images, by Jesse Zeldes ’22 were an assignment for Astro341: Advances Observational Astrophysics, which is running through the Fall 2020 semester.

These images show Mars and the Moon during their Sept 5th 2020 conjunction taken through 3 separate filters using the CCD on our 16″ telescope.

Jesse explains: “Because the Moon orbits Earth, while Mars orbits the Sun, even images taken in quick succession show the relative motion between them. Here we have the same set of images of the Moon and Mars in conjunction on September 5, 2020, processed in two different ways. ”

Jesse continues: “The images consist of five 0.07 second exposures in each of the g, r and i filters, taken using our Finger Lakes Instrumentation CCD, which has a 0.5degree field of view. These exposures are then stacked to create a single image for each filter, which are then stacked to create the final image. g-band data (denoted blue) were taken first, following by i (red) and r (green), with approximately 20-second delays in between each”.

Stay tuned for more colourful CCD images from our 16″ from the thirteen other students in this class. 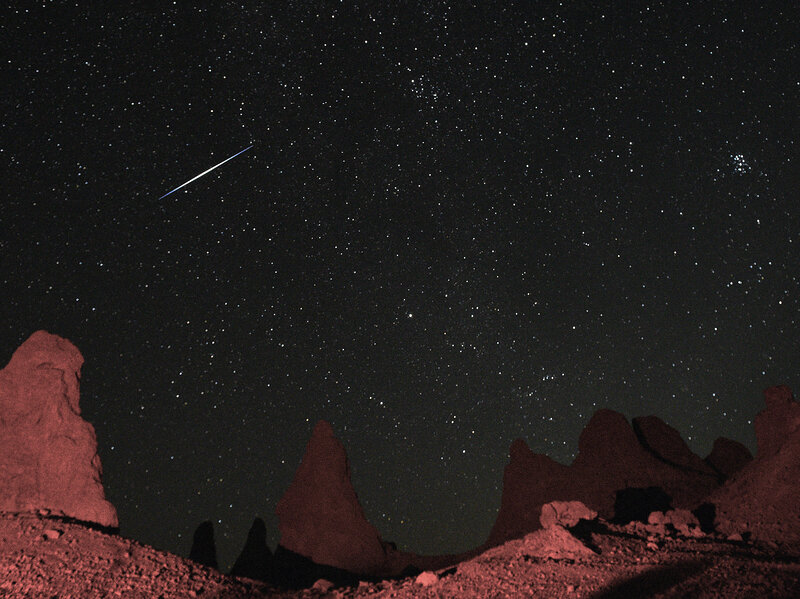 Meteor showers occur when Earth passes into a region of comet debris. The debris (rock and dust the size of grains of sand) burns when it collides with our atmosphere. Meteor showers are named after the radiant, or constellation where meteors appear to originate.

Meteors in the Perseid meteor shower appear to originate from the constellation Perseus, but the debris is left behind by the comet 109P/Swift-Tuttle, which orbits the sun every 133 years.

The Perseid meteor shower occurs each year from late July until late August. This year the peak days are August 11-13.

The most important tip to viewing a meteor shower is to choose a location where the sky is dark and there is a wide open view of the sky. Avoid city light pollution by going to a park or public sports field. Be mindful of park hours– many parks close at dusk.

You do not need to look at any part of the sky, but they do appear to come from near the constellations of Cassiopeia and Perseus in the northeast.

Before going outside, look up the weather and when the moon rises in your location. It is important to look at the weather as clouds and rain will prevent you from seeing the meteors. Also, the moon will wash out many dimmer meteors so you may want to choose a time before the moon rises.

For example, the moon rises at 12:14 am on Wednesday morning in Philadelphia so a good time to look for meteors would be 11 pm Tuesday night, before the moon rises. (To look up when the moon rises in your location, you can use https://www.timeanddate.com/moon/usa/).

Plan to be outside for at least an hour. If you have a lawn chair, lean back in it. Else you can lie on the ground or on top of a blanket. You might want to grab pillows, blankets, a jacket and a snack to enjoy.

Let your eyes adjust to the low lighting for 20-30 minutes. During this time, you will want to refrain from looking at bright lights– even your phone.

Once your eyes adjust, fix your gaze about halfway up the sky; more activity is visible at lower elevations. Expect to see 15-20 meteors per hour when the moon is visible, and more if it is below the horizon.

NASA reports that the best time to view the Perseid meteor shower is between local midnight and sunrise.

Miss the meteor show? Don’t worry. It will return next August and there are other shows to look forward to, such as the Geminids in December.

Today is the Full Moon, and if it weren’t for Tropical Storm/Hurricane Isaiah on its way, we’d get a wonderful view of the Moon, Jupiter and Saturn this evening, as this screenshot from Stellarium (free download) shows.

Meanwhile you might also enjoy these views of Jupiter and Saturn taken by James Garland ’22 and Dominick Rowan ’20 last October.

We hope we’ll be able to invite you to visit our telescopes at some point in the future. Meanwhile for the Fall we are working on a virtual alternative to our usual Public Observing Nights. Stay tuned!

We had an opportunity to upgrade the CCD (digital camera) on our 16″ telescope this year. I am happy to report a beautiful first light image of the Orion Nebula. Much credit to our Lab Instructor, Paul Thorman for making this happen. This will make for much more exciting imaging and photometry opportunities for our Observational classes as well as Public Observing events.

As well as an update to our CCD, and with a much larger field of view than before (now 34 arcmin, or half a degree on a side instead of 8×12 arcmin) we also got more filters, which will improve our ability to make colour images, as well as measure photometric properties in more filter bands.

A group shot of the Student public observing team (and me) in our new T-shirts before an extremely busy Spooky Stargazing event last Friday.