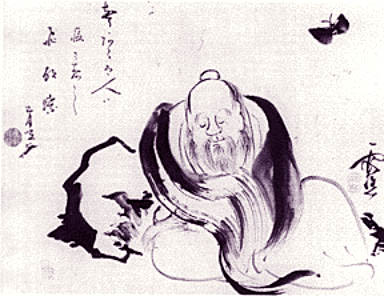 “The Butterfly Dream” is the most famous story in the Zhuangzi (c. 3rd century bce), one of two foundational texts of Daoism, along with the Daodejing:

As in all dream-interpretation, attempts to comment on the meaning of this allegory may reveal as much about the interpreter’s own philosophical prejudices as about the story itself.

Inescapably entangled in Western assumptions, my initial interpretation drew parallels to Plato’s allegory of the cave and Descartes’ doubt-sowing demon — here was another familiar story about the difference between reality and appearance, truth and illusion! Here was a doubting consciousness, relying on reflection and memory to anchor itself to a fixed, essential identity, just as we do in every morning’s first murky moments — “Huh? What’s this? The same body in the same bed as the morning before, and the one before that… Ah, I remember, I’m the same old myself. Shame, I must have only been dreaming that I was a free-range heifer on the first day of spring…”

But this is an ancient Daoist story, and Zhuang Zhou doesn’t seem so sure he’s really awake. In fact, Zhuang Zhou seems to have pondered his way right into a paradox — if both dreaming and waking feel real, they’re both vulnerable to doubt — his true identity might be that of a dreaming butterfly! “Whoa, far out! Maybe I am still frolicking in fresh pasture, and just dreaming I have to snarf this oatmeal and haul myself to the library!” Now, hip to the whole Daoist-sage vibe (“Dude, all is one!”), I’ve figured out Zhuang Zhou’s error: he created a boundary between waking and sleeping, drawing a division which tried to resist the inescapable ‘Transformation of Things.’

But wait – have I been talking too much about Zhuang Zhou? What about the butterfly — it certainly seemed to be having a great time “flittering and fluttering around.” Could the moral be that we’re cursed with consciousness, that our mind’s pesky ponderings ruin the happiness that’s all around us? And if this Zhuangzi fellow wanted us all to be butterflies, why did he write a book? And what’s the deal with those last two lines of mumbo-jumbo: “Between Zhuang Zhou and a butterfly, there must be some distinction! This is called the Transformation of Things.” This whole ancient philosophy thing is harder than I thought…

But I’m not alone in my confusion —two millennia worth of geniuses have gotten to puzzle out this particular pickle, so why not see what they have to say? (“If only The Giving Tree could get that sort of treatment!”) Guo Xiang (252-312), the most influential commentator on the Zhuangzi, keeps it short and sweet:

There is a real distinction between life and death, giving each their full, autonomous reality. We don’t cross this barrier between life and death; our living self ceases at death’s boundary. Accepting and affirming the natural boundaries of our life, we fully inhabit its reality without trying to transgress into the next segmented phase of transformation (i.e. death – howsoever it may be). We are totally present in the authenticity of the here-and-now of living precisely when we don’t reflect on what may be beyond it.

It’s the same with the distinction between waking and dreaming — or really between any segmented phases in a series of transformations — we affirm our present being when we fully lodge in its “temporary role,” not violating the limits currently enclosing it.

Guo Xiang notes the butterfly has this down pat: it gets to ‘flutter about joyfully’ because it is emptied of mental reflection, with no grounds for devaluating its current phase of existence. Zhuang Zhou’s problem isn’t that he draws a distinction between phases of transformation; rather, he’s at fault for using his conscious reflection to try to bridge those phases and find some essential identity that connects them. By clinging to the hope of some essential, indivisible self which persists across transformations, Zhuang Zhou ensures that transformations will sow sadness, doubt and loss (death is only a sorrow to those clinging to life).

So the Zhuang Zhou who wakes up is indeed Zhuang Zhou, real and authentic, ‘solid and unmistakeable.’ At the same time, the butterfly “happy with himself and doing as he pleased” is really a butterfly. There are no grounds for devaluating either phase, because each fully occupies its own position within an ongoing process of transformation. Each identity comes into and out of being along with its temporary role — a role given full shape by its boundaries. Zhuou is of course himself when he awakes, but that self will be no more when the next transformation comes because change literally turns one ‘I’ into another. Thus, acknowledging distinctions isn’t futile in the face of inevitable change; rather, affirming and accepting the boundaries of our being allows for the “Transformation of Things” to run smoothly. To me, that’s the big point of Zhuang Zhou’s dream: it teaches the Daoist conception of change, in which each phase fully inhabits its own rightness by lodging within its limits.

Whew! We made it! But wait — if the Butterfly and Zhuang Zhou need to accept their own limits, who is telling this story? If I had to guess, I’d say Zhuangzi, or ‘Master Zhuang,’ the honorific of that sage once called Zhuang Zhou. (“Wait, this is really Zhuangzi telling a story about himself?” “Not at all! Weren’t you listening? Sigh…”)

And how can Zhuangzi see both sides, butterfly and Zhuang Zhou? Wouldn’t he have to be at the center of these changes, a sort of zero-perspective that accepts each phase’s being without judgement?

Well, maybe Zhuangzi is a true sage, an empty center at the revolving wheel of Being. As Zhuangzi himself writes, a consummate sage has no self, no being — with tenuous virtuality he is “miraculous, beyond understanding! The lakes may burst into flames around him, but this can’t make him feel it is too hot. The rivers may freeze over, but this can’t make him feel it is too cold. Ferocious thunder may crumble the mountains, the winds may shake the seas, but this cannot make him feel startled. Such a person chariots on the clouds and winds, piggybacks on the sun and moon, and wanders beyond the four seas. Even death and life can do nothing to change him — much less the transitions between benefit and harm!” (Ziporyn18)

Well that sounds pretty cool, but I don’t think I can really get with the sage’s zero-perspective… Frankly it sounds difficult and scary, and my parents are paying a lot of money to keep me here so I think I need to achieve something a little more, well, concrete. But maybe accepting that I’m not a sage is also accepting one of my natural boundaries, a step towards full presence in the rightness of each present moment! Hooray! … Wow it’s bright out! … Hmmm. I feel hungry… Wait what was I just saying? Oh well, I lost it. I guess I didn’t learn anything after all from that silly story. Now what? Ahh, breakfast! Mmmm, this oatmeal is delicious. And just feel that golden morning sunshine filtering through the window… Aren’t Wednesdays awesome!…

** The general thrust of my reading is also indebted to Hans Goerge Moeller’s Daoism Explained: From the Dream of the Butterfly to the Fishnet Allegory (Chicago: Open Court, 2004). **