Play with your Art (Crosslisted: CRYPTIC/CORRUPT)

For the most part, if you’re a college student now, you’re a generation that grew up post-arcade. There was one relatively near where I grew up that was a hotspot for birthday parties, but we never went just to hang out some afternoon. I’m told they used to be dark dens of teenage mischief-making—mazes of weird and inscrutable games, screens smudged with grease, air heavy with smoke… Obviously the arcade has changed—the one I remember is gone (replaced by laser tag, I think? Not all history is progress)—but this figure of the arcade sticks with us, a tangle of metaphorical cables, an unidentifiable stain on the wall-to-wall carpeting of our minds.

I’m running a Student Seminar called Decoding Videogames, in which we attempt to critically analyze games through their outward-facing content and internal mechanics. For Crosslisted last Friday, we decided to display some of the games we’re looking at to the community, for their own investigation. We set up a plastic dining table and covered it in machines: mostly macbooks, a thinkpad, and a couple tablets. Briefly (from noon to one) the Cantor Fitzgerald Gallery Lounge played host to Cryptic/Corrupt, a collection of unusual videogames. There was also a box of pastries. Among the inedible delicacies available to passers-by were: 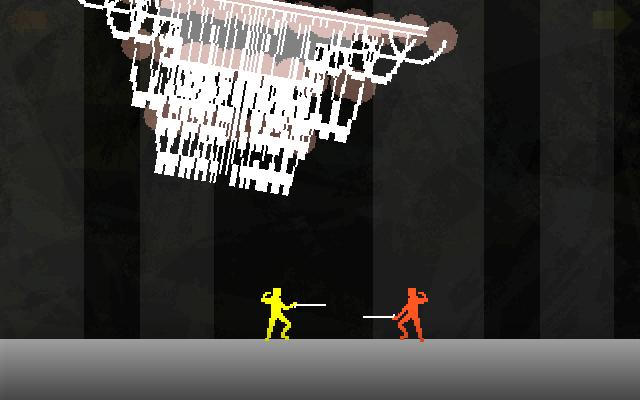 I suspect Nidhogg drew the most eyes—its retro-styled graphics are chunky and colorful, and we had it up on a TV surrounded by leather couches. The one-on-one sword-fighting game can be controlled with just two buttons and a directional pad, but the game underneath has enough tactical “I know that you know that I know that you know…” that it doesn’t just look like fencing, it’s something of a digital cousin at a deeper mechanical level. 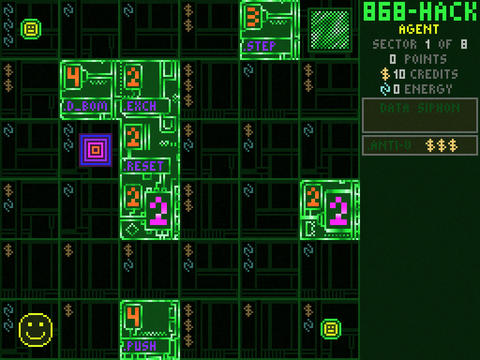 An iOS game almost like solitaire chess—if you’re not thinking a couple moves ahead, you won’t make it terribly far. The developer, Michael Brough, is way into letting the mechanics of his games slowly reveal themselves to the player. They’re hard—because they refuse to be understood at first glance—but enticing—because you’re learning more about how they work with every move. 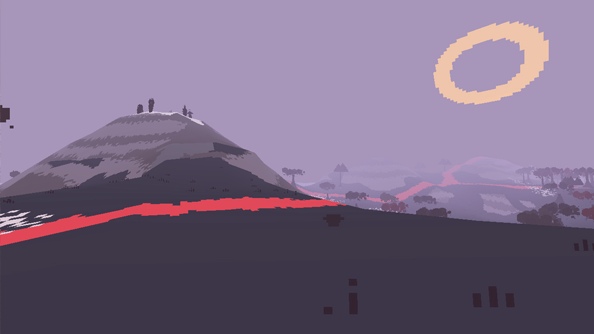 I’d initially talked to James about including Proteus, but decided almost last minute that a mod might be more interesting. There’s a huge thread about modding Proteus on one of my favorite game-making community websites, makega.me. Where Proteus is a bright and gleeful first-person island-wanderer (FPIW?), Purgateus takes a slower, darker tone. The trees are burned out, the sky is grey, the graveyards seem more somber.

howling dogs
I’ll recommend this game forever. It’s two or three years old by now, but still one of the best things I’ve ever played. When Richard Hofmeier won IGF 2011 for Cart Life, he decided he’d had enough publicity and converted the booth for his game into a spray-painted display for this one. To compare its author, Porpentine, to Borges and Calvino might feel to you like blasphemy, but if we’re forming a new canon, she’s part of it. If I didn’t think assigning genre were too restrictive, I might call it sci-fi magical realism.

If you’ve ever been at a party and felt like the most uncool person in the room, you have an idea what SpyParty is like. As the Spy, you drink your drink and time your conversation so you can look like a computer player, and as the Sniper, it’s your job to find the party-goer who looks a little too human and shoot them. SpyParty is played on two different computers over the internet, and had some internet-related troubles during our event—Charles ran to get ethernet cables to see if we could connect them via LAN, we tried a few different networks, and unfortunately nothing really worked.

This is another game from a makega.me event, this time a month-long event where games were made based on songs. Thecatamites put together a 11-game summer jams mixtape, and this game stands out as the most immediately readable (which may not be saying all that much). It’s about the daily hardships of peasant life, dealing with loss, and the unstoppable force of war. That’s a lot to pack into a 5-minute flash game, but thecatamites pulls it off without a hitch.

and as an Honorable Mention: 74: 78: 68
Again because of our internet issues and last minute laptop substitutions, this game didn’t quite make it to the table. If you’re a brave soul, and don’t mind possibly crashing your browser, I recommend you give it a go. The goal is to make enough instances of yourself that the game’s frame-rate drops to zero, which, weirdly enough means the game is easier the older your computer is.

And that was our little arcade, hopefully a fun time for all who stopped by. I also hope you’ll check out Crosslisted events in the future—there’s one every Friday at Noon right between the Coop and the Cantor Fitzgerald Gallery. Next week, 11/21, Ghosts in the Archive: A conversation on photography, performance, and the Ghost Dance religion with Assistant Professor of English Lindsay Reckson and Emma Lumeij ’16

Maybe I’ll see you there!