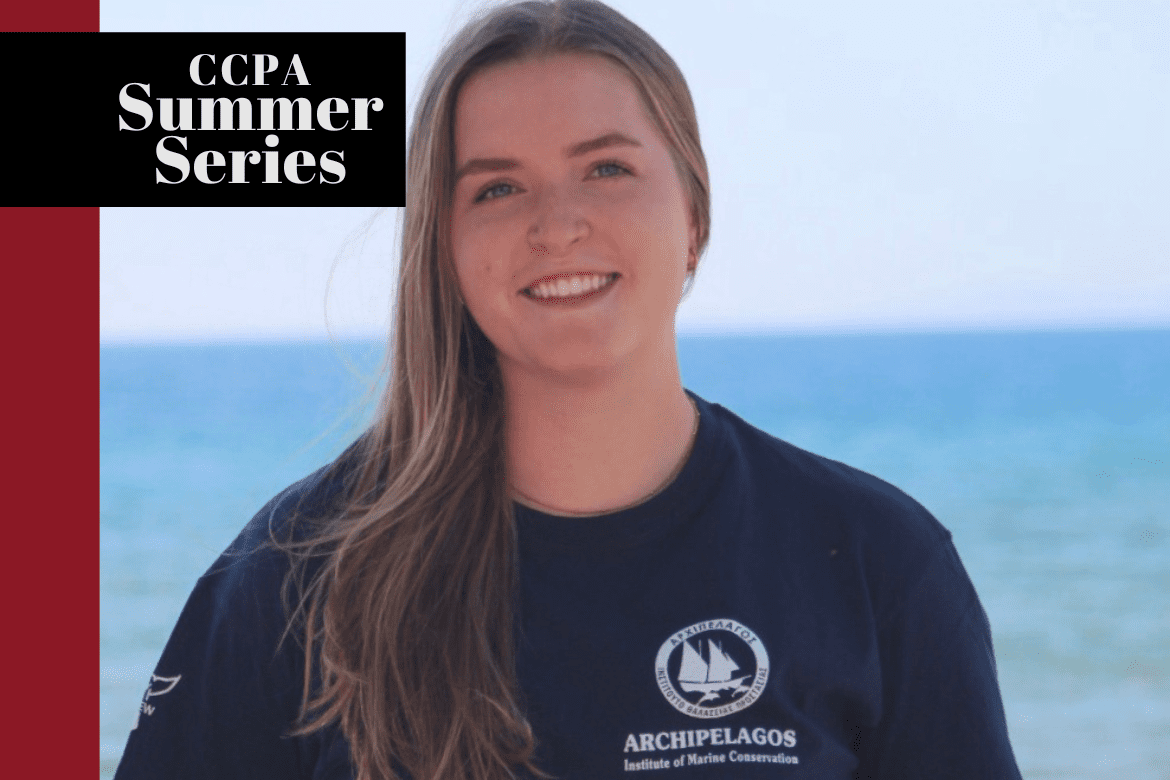 My name is Natalie Goeler-Slough (she/her), and I’m a rising junior majoring in Biology and minoring in Environmental Studies. I’m excited to tell you about my internship this past summer at Archipelagos Institute of Marine Conservation, on the Greek island of Samos! Archipelagos is a non-profit organization that works to research and protect the biodiversity in the Greek seas, using multidisciplinary research and conservation work to protect marine and terrestrial life. The organization is made up of several different core teams across multiple bases, such as marine mammal, microplastics, marine ecology, GIS, law and policy, and terrestrial. I worked principally as a member of the marine mammal team, where we collected and analyzed data about the abundance, distribution, and behavior of marine mammals (primarily dolphins, but also some whales and seals).

One of my favorite parts of my internship was the fieldwork we performed, like our boat-based surveys to monitor the resident cetacean populations. These could range from half-day surveys to multi-day surveys, where we would sleep overnight on the boat. During surveys, we collected photographic data to be able to later identify specific individuals, video to analyze cetaceans’ behavior, bioacoustic recordings to analyze animals’ whistles and clicks, as well as other environmental data including marine traffic and seabird presence. Other fieldwork included land-based surveys to monitor bird populations (such as sunrise surveys of flamingos at a nearby salt marsh), nighttime surveys to look for chameleons and other reptiles, daily surveys to collect data on macroplastics at local beaches, or setting up camera traps to monitor jackal and other terrestrial animal populations.

Outside of the fieldwork we performed, there was time we spent in the office to analyze all the data that we collected. One of the primary projects I worked on was creating and refining a catalog of individuals of the Delphinus delphis species (the short-beaked common dolphin) through photo identification. Using the photos taken on boat surveys since 2015, I worked to identify specific individuals, using unique notches, markings, and coloration on their dorsal fins and bodies to differentiate. Just as each human’s fingerprint is unique, the dorsal fin of each dolphin is unique, so they are very valuable in identifying specific dolphins! We identified re-sightings of individuals throughout the seven years of data collected, noting the coordinates of their sightings and other individuals they were sighted with, to analyze in various projects. We use this data to identify certain individuals or groups that are frequently sighted together, and gain information on population size and trends, social structure, and movement patterns. While looking into other marine conservation organizations in the area, we even found an organization in Turkey that had identified many of the same individuals as we had in our catalog! Samos is very close geographically to Turkey, but it was very interesting to see the crossover of our data, and how powerful it can be to share scientific data.

Additionally, I learned how to make maps using QGIS, and created many distribution maps of all the animals that Archipelagos had recorded sightings of since 2015: dolphins, whales, seals, and sea turtles. I also used GIS to make maps for our boat surveys using data we collected while at sea. Through GIS, we could map out the trajectory that we followed using data points collected every 30 seconds while on the boat, highlight sightings in different colors, and identify any key points along our journey. We included these maps in boat reports that we drafted after each boat survey to have a concise record and log of every survey.

On top of the work I did throughout my internship, I was able to explore Greece in my free time! I had the opportunity to learn more about Greek culture and the rich history of the island where I was living, connect with members of the local community, and travel to see some truly amazing places on Samos and nearby islands. I am so very grateful to everyone who made this incredible experience possible for me: the Deborah-Lafer-Scher scholarship, the CCPA, my supervisors at Archipelagos, and all the interns that I was lucky enough to work with this summer.